Do you know what you’re breathing?

The e-liquids or ‘juices’ used in electronic vaping devices generally consist of three key components: solvents, flavours and sweetners, with some juices also containing nicotine. When you inhale the aerosol vapour produced by these devices you are also inhaling the fine particles of these ingredients.

Although most of the ingredients present in vape devices are “generally recognised as safe” for consumption by the U.S. Food and Drug Administration (FDA), it is important to remember that this statement is only relevant when eating these products – not breathing them.

Little is known about the effects these ingredients have on the human body when inhaled, with research in this area still developing.

However, what we do know is that many of the ingredients commonly found in vaping devices break down to form dangerous compounds when heated, with some ingredients being found to have cancer-causing properties.

There are even instances where vapes have been found to include traces of toxic heavy metals leached from the heating elements themselves! 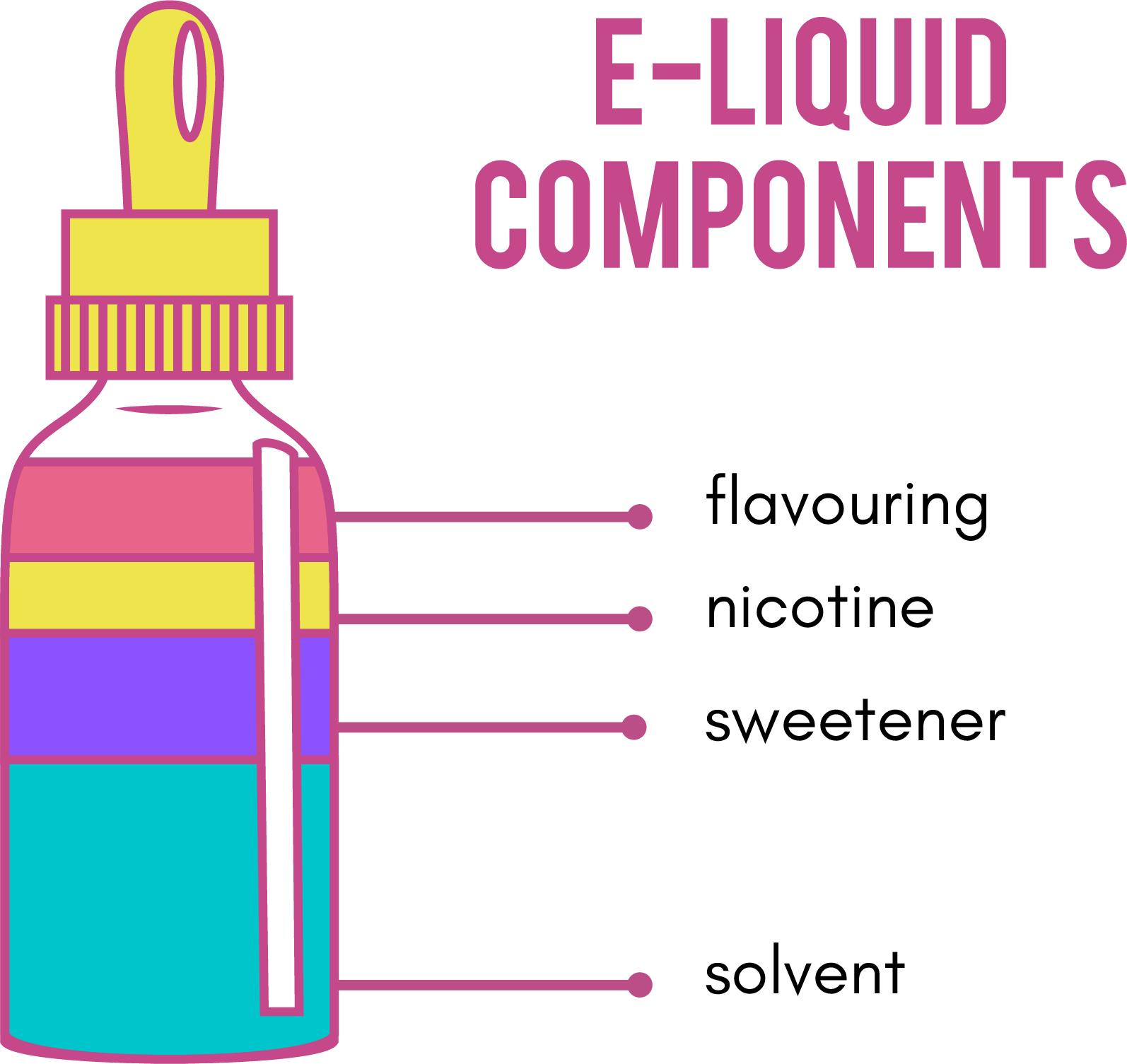 So what are these vaping ingredients?

The solvent ‘base’ of e-liquids helps to dissolve the ingredients so that these can be inhaled. The solvents found in most vaping devices are vegetable glycerine and propylene glycol.

Vegetable glycerine is a natural liquid extracted from plant oils, and is a common ingredient in pharmaceutical drugs and the beauty industry. It’s responsible for producing the visible aerosol or ‘cloud’ we see when someone vapes.

Vapes also contain propylene glycol, which is a synthetic and petroleum-based organic compound. This product is often used in beauty products such as deodorants and fragrances.

Research shows that when heated e-juice containing propylene glycol and vegetable glycerine can release cancer-causing formaldehyde – yes the same chemical used to preserve dead bodies, yuck! Studies also show that these heated solvents may lead to inflammation of the lungs over a period of time. Hmmm inflamed lung?  That doesn’t sound good.

Sucralose is an artificial sweetener, and is often used as a zero calorie sugar replacement. Although sucralose poses minimal risk to eat, heating sucralose to high temperatures may lead it to breaking down into harmful chemicals.

Ethyl maltol is another synthetic organic compound used to sweeten vape juice, it’s often used as an artificial sweetener in sugar free lollies. Ethyl maltol has a strong sweet scent and tastes similar to caramelised sugar. Like sucralose, we don’t know that ethyl maltol is safe to inhale.

Vaping products are now manufactured with thousands of different flavour variants such as cinnamon, berry, tropical and menthol. Each of these ingredients also carries their own potential risk and side effects.

For example, a study from Yale University found that vanillin — an extract from vanilla beans — turned into chemicals called acetals when aerosolised (heated into vapour). Those chemicals were associated with lung irritation and damage.

Another study found that e-liquid containing cinnamon flavouring turned into a cancer-causing compound when heated. As a result, it was quickly removed from the market.

One of the problems is that there are so many flavours, and many of them have not been tested to see if they are harmful when inhaled.

A lot of e-liquids contain nicotine, which is the same highly addictive drug found in tobacco. Nicotine is one of the hardest things for people to give up, with addiction and withdrawal causing both physical and psychological effects. Many people find it very hard to quit smoking because they have become addicted to nicotine.

Nicotine can also have direct harmful effects. It increases blood pressure and heart rate. In youth and young adults, nicotine may harm brain development, and may also be dangerous for pregnant women and their developing babies.

Nicotine produces physical and mood-altering effects in your brain that may give some short-term pleasure. However, withdrawal is fast and intense. Insomnia, irritability, and anxiety are just some of the effects people who are addicted to nicotine experience. That’s not to mention the physical symptoms, like restlessness, increased hunger, constipation or diarrhoea. Gross

Some e-liquids have been found to contain heavy metals such as cadmium, chromium, lead, manganese and nickel. These five heavy metals can be toxic to inhale and may cause cancer. Researchers believe it is the coil that heats the liquid in vapes that is the main source of these metals, so they may be more common where the coil is overheated.

Your safest bet is, if you don’t smoke, don’t pick up a vape.

And the flavours? Well, they taste good, but many flavours have not been tested and may  not be safe to inhale. You can eat them, but there are tons of things you can eat but shouldn’t breathe in such as fizzy drinks – fun to drink, not so fun when it goes down your nose while laughing – right?!

Next: What are the risks?